Celebrations happen all around the world on New Year’s Eve and there are so many spectacular firework displays in different countries. Big cities across the globe will put on an amazing firework display to bring in the New Year. These events are not to be missed so we have put together the top 7 destinations across the world you should visit to celebrate the New Year! 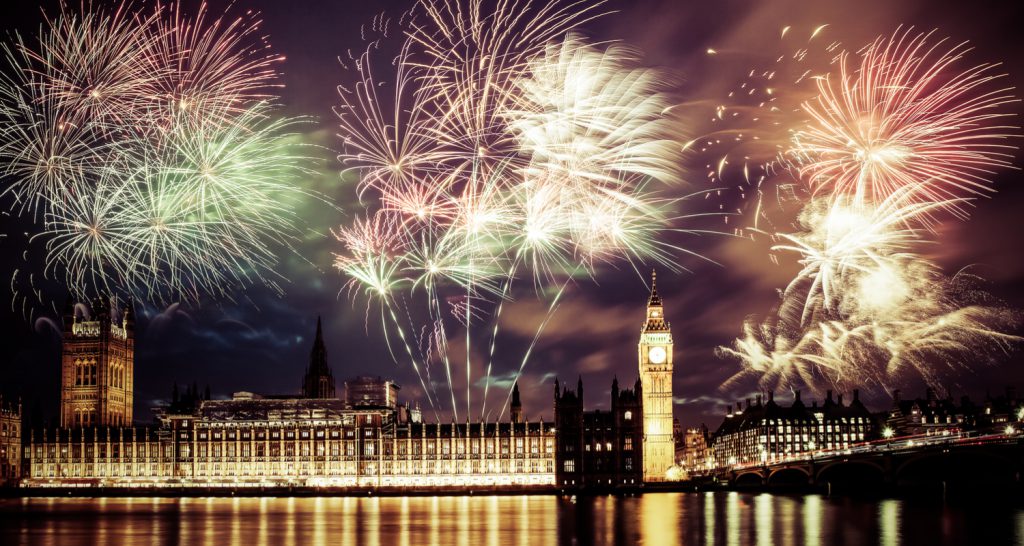 London really does know how to put on a show. The popular New Years Eve display takes place over iconic landmarks including Big Ben, The London Eye and the River Thames. Standing on the Southbank with the Thames in your view you can see the spectacular fireworks reflect off of the waters making it truly magical. This display does require tickets in order to keep the event safe. All tickets have sold out but but wherever you may be in the city you are sure to see the sky light up. 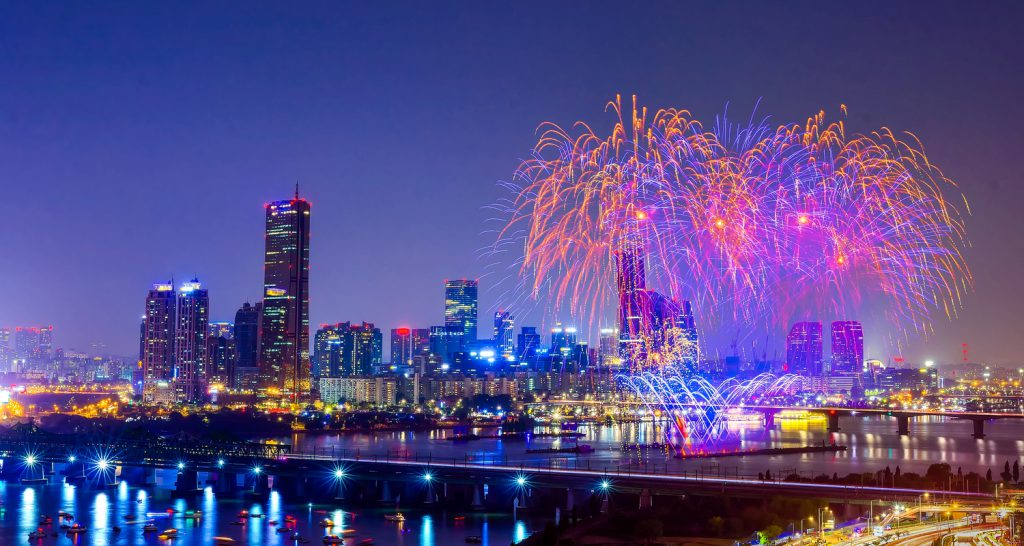 Times Square in the heart of New York is a renowned destination for New Years Eve celebrations. The ‘ball drop’ is an iconic event in Times Square, which is then followed by a firework display as everybody celebrates. The bright lit centre is a one of a kind event in New York. For a view with the New York skyline in, the Brooklyn Bridge display will leave you with breathtaking views of the city. There are numerous tours you can take to see the Brooklyn bridge firework display which will leave you with a great way to start your 2018. You can even hit the January sales the day after! 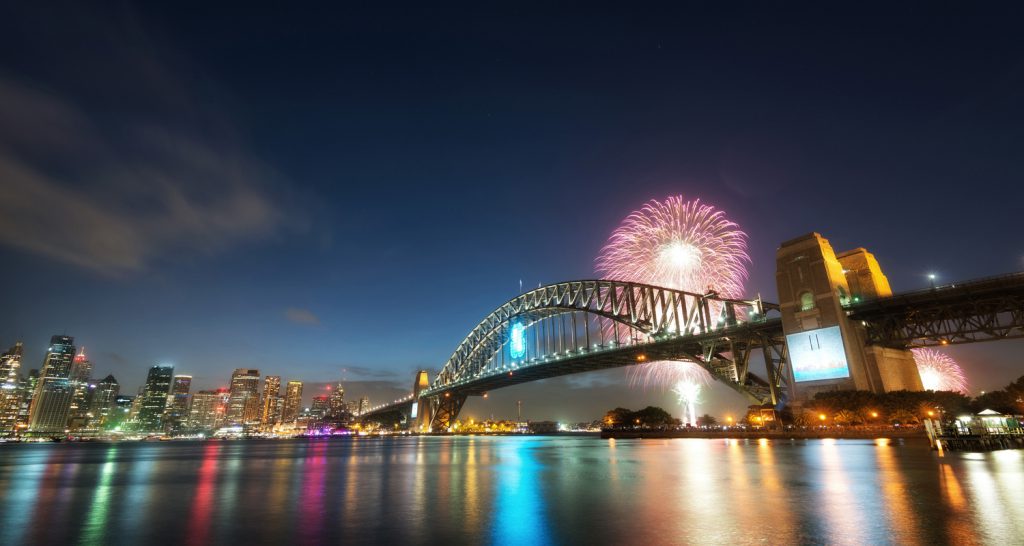 One of the first countries to start the New Year is Australia; this is a party that you will definitely not want to miss. The surrounding areas of the Sydney Opera House have events on from 6pm onward to get you in the New Year spirit; you can see a schedule here. At midnight the AMAZING firework celebrations begin with displays on the iconic Sydney Harbour Bridge and Opera House. Find out more about New Year’s Eve celebrations in Sydney here. 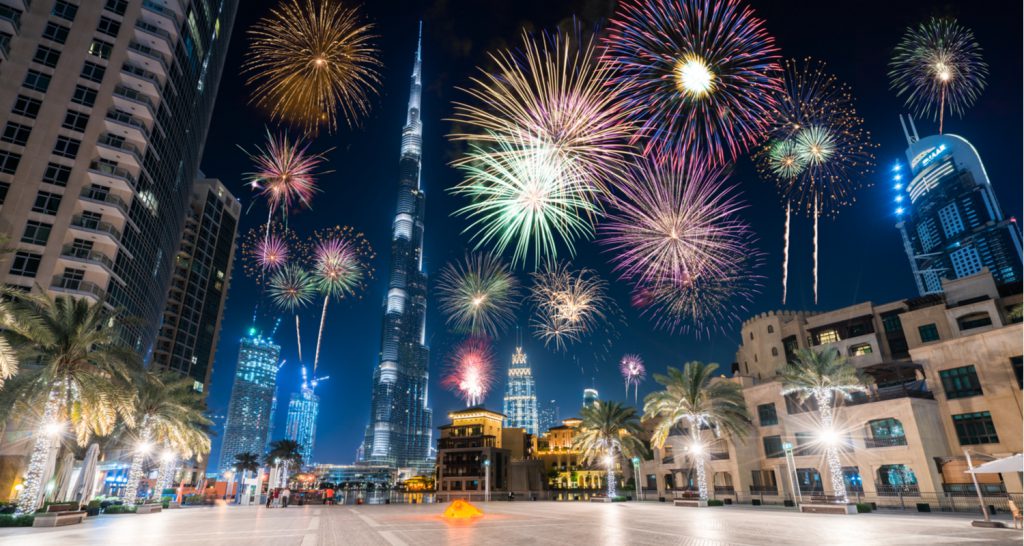 The flashy UAE destination does not hold back when celebrating. There are not just a few fireworks but there are around 479,651 in the magnificent New Years Eve firework celebration, making it one of the biggest in the world. There are different locations in Dubai where fireworks can be seen. The majority of celebrations have free access but check in advanced the different locations which require you to pre book tickets. Our top spots we recommend to view the New Years Eve fireworks in Dubai include the Burj Khalifa/The Dubai Fountain, Jumeirah Beach and The Palm. 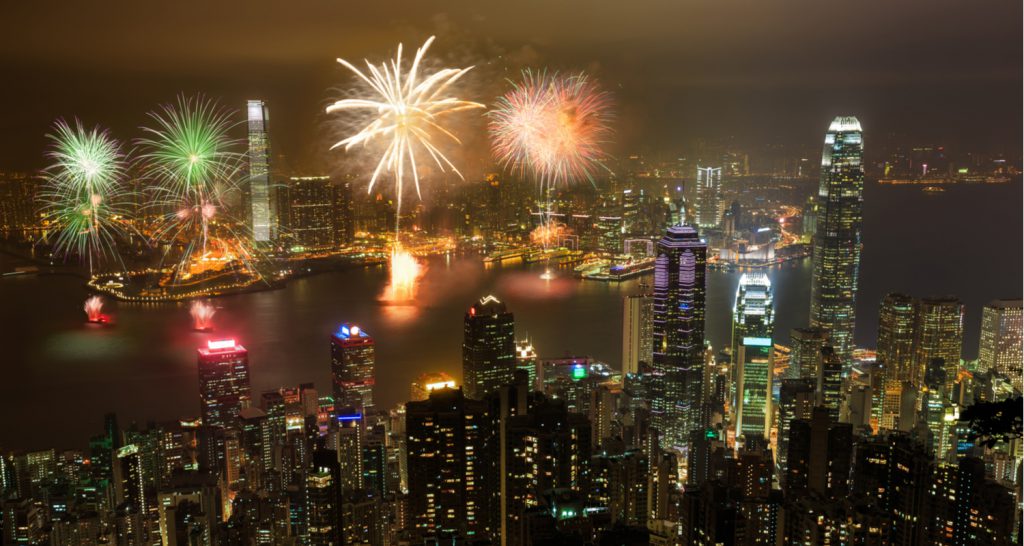 A Symphony of Lights, the Hong Kong firework celebrations offer an amazing view of the city’s skyline. The countdown is projected on the IFC tower with ‘Shooting Star’ fireworks every 15 minutes in the last hour leading up to the main event. Once it is midnight, the show begins with fireworks being launched from Hong Kong’s landmark buildings and skyscrapers. This is a display you need to see one year and if you are lucky enough to be in Hong Kong for the New Year, you can see the schedule for the big evening here.

Copacabana Beach in Rio, Brazil, sees almost 2 million people turn out for the annual party. If you have seen New Years Eve fireworks in other countries then this has got to be the best display you will see. Music, drink and food make this celebration into a party before the fireworks are set off on the beach at midnight. It is a tradition to wear white on New Year Eve as it is aid to bring good luck into the New Year in Brazil.

Wherever you are celebrating New Years Eve in your home country or have decided to venture across the globe, you will be blown away by the different displays. We would love for you to share with us where you are spending New Years Eve this year over on Twitter. Tempted by these destinations? It is not too late to book a last minute break for New Years Eve!

Tips to consider when travelling to Bangkok

Essentials to wear on an overnight flight